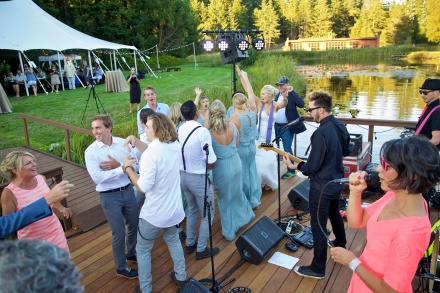 “Atomic Pop ROCK! They performed at our wedding and really helped to make the night unforgettable. I can’t even tell you how many people came up to us after and said they were by far the best band they’ve ever seen at a wedding. They have such great sound and energy!!!! Their attitudes are so great as well – We had several specific song requests for our wedding and they (without hesitation) agreed and learned them and then they performed them better than I could have imagined. Not to mention my dad plays the guitar and they made his night (seriously almost as much if not more than his little girl getting married haha) by letting him come up and perform a few songs with them. We searched for MONTHS trying to find a band, and thankfully a friend recommended Atomic Pop to us and the second we saw them perform we knew we had to have them at our wedding. Can’t thank the band enough for being as all around wonderful as they were. If you’re looking for a band to hire with great sound, great energy, and that will provide a great time look no further.”

No incoming links found yet.